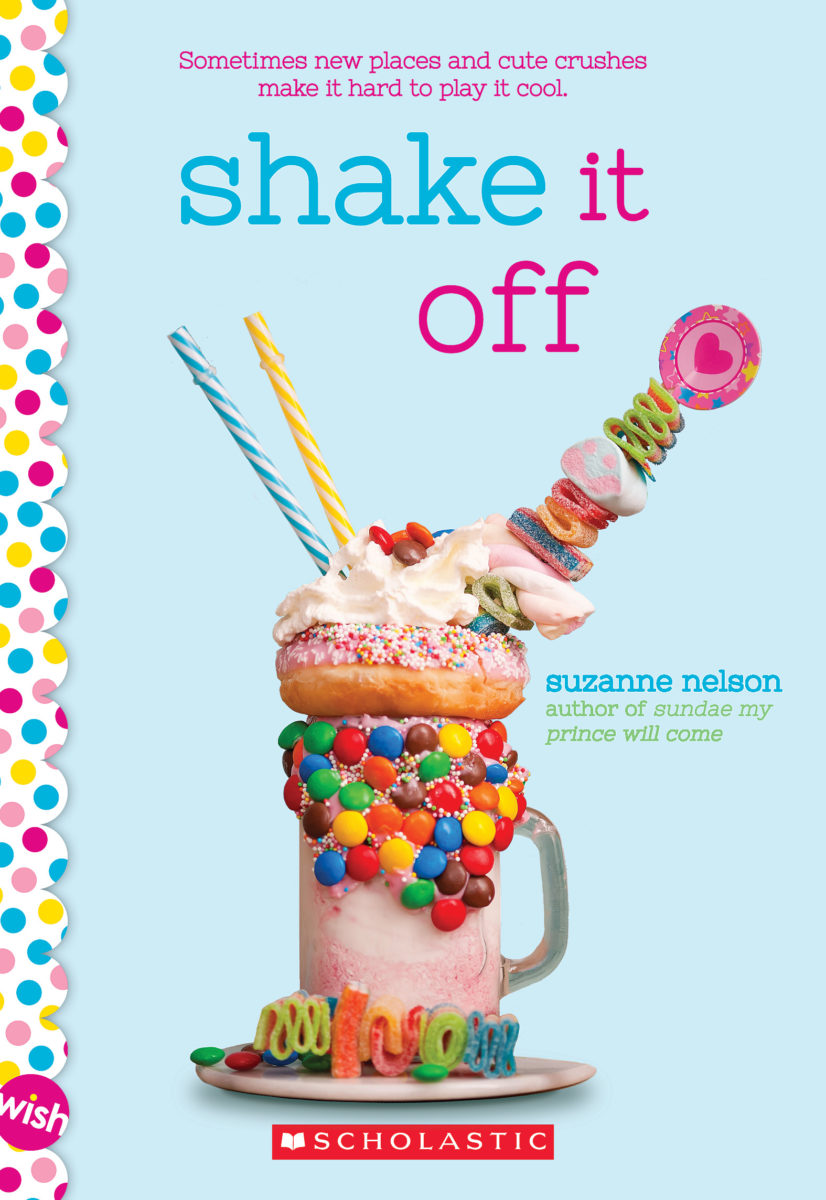 Shake It Off is a companion Book to Cake Pop Crush, You’re Bacon Me Crazy, Hot Cocoa Hearts, Macarons at Midnight, Donut Go Breaking My Heart, Sundae My Prince Will Come, and I Only Have Pies for You

Available for purchase in bookstores and online.

Bria is not happy about being stuck on her aunt and uncle’s dairy farm for the summer. Milking cows alongside her cousin Wren? No thanks.

Instead, she sticks to mixing up milkshakes in the creamery, where she starts crafting over-the-top shakes like the ones she loved back in Chicago. Wren, and the customers, aren’t impressed. Everyone thinks Bria is just a snobby city girl.

There is one person who appreciates the sweet, cold, treats: Gabe, her cousins’ cute friend. But with the family business in danger of being sold, can Bria’s shakes make a difference… and will she ever fit into country life?

There were several dozen cows grazing a few hundred feet away, but they didn’t even glance up at me. Keeping my eyes trained on the phone, at last, I saw one bar flicker to life on its screen. Careful not to move the phone from its position lest I lose the reception, I texted Leila.

SOS, I typed. ALRDY DYING OF BOREDOM. SAVE ME FROM THE STICKS.

I was halfway through signing my name when a chorus of elated “Moos,” much too close for comfort, sounded to my right. I glanced up just in time to see three Holsteins trotting past me, making a beeline for the open pasture gate.

I gulped, my pulse ratcheting into my chest. Open! The gate! I’d forgotten to latch it behind me when I’d walked into the pasture. And—oh no!—at least twenty cows had escaped through the gate and into the creamery parking lot!

I broke into a run, waving my arms at the cows still heading for the gate, hoping I might be able to corral them to keep them from getting out, too.

“Hey!” I shouted. “Get back here!” I whistled, trying to keep my balance on the slippery, mud-riddled ground. “Come here, girls! Come on! That’s a good cow!”

The cows did not come. The cows ran faster.

Suddenly, Gabe was running towards the pasture from the equipment barn, and seconds later, he was stepping in front of me, barricading me from the cows. “Don’t shout.” His voice was quiet and firm. “Unless you want a stampede.” He turned his piercing, steel gray eyes on me, and for the first time since I’d met him, his patient smile was gone. Then he focused his attention back on the cows, ignoring me entirely.

I blushed indignantly and tried to keep pace with him as he stepped in long, purposeful strides towards the cows.

I straightened my shoulders. “But I’m only trying to hel—” The rest of my words were lost as my feet slipped out from under me and I became airborne. With a repugnant Squelch!, I landed face first in a giant mud puddle.

“Eeuw!” I shrieked, sputtering as I tried to keep the mud from trickling into my mouth and eyes. “Ew ew ew!”

I wiped at my eyes with the back of my hand, expecting that at any moment Luke or Wren or someone would come to help me. I could still hear excited voices and the lowing of innumerable cows. But no one came for me. Finally, I dragged myself out of the mud and glanced towards the parking lot, where Luke, Wren, Aunt Beth, and Uncle Troy were all busy herding the cows away from customers and the CheeseCo entourage back towards the pasture….

Out of everyone, it was Gabe who had the most command of the situation, talking to the cows in a low, quiet voice that calmed them. He was coaxing the cows slowly back into the pasture, and like children under the magic spell of a pied piper, they serenely followed him….

“I’m sorry,” I said…but no one seemed to hear except Gabe. Even though there was a look of dismay on his face, he laughed quietly. “I’ve got to hand it to you, Bria.” He shook his head. “You’re having a killer first day.”

Heated embarrassment flashed over me as he latched the pasture gate behind him, leaving the cows safely to their grazing. “Why is there a WiFi hotspot in the middle of a stinking field anyway?”

He grinned again, making me want to smack him. “Look. You don’t know what you’re doing,” he said it gently, but it still stung. “Just stay out of the pasture so my cows don’t get hurt.”

He brushed past me, his broad shoulders shaking with laughter, and disappeared into the milking barn. I stared after him, fuming.

“I…I…” My words died in my throat. I wanted to tell him how wrong he was. That I did too know what I was doing. But he already knew the truth, and besides that, he seemed to find it hilarious.