I Only Have Pies for You 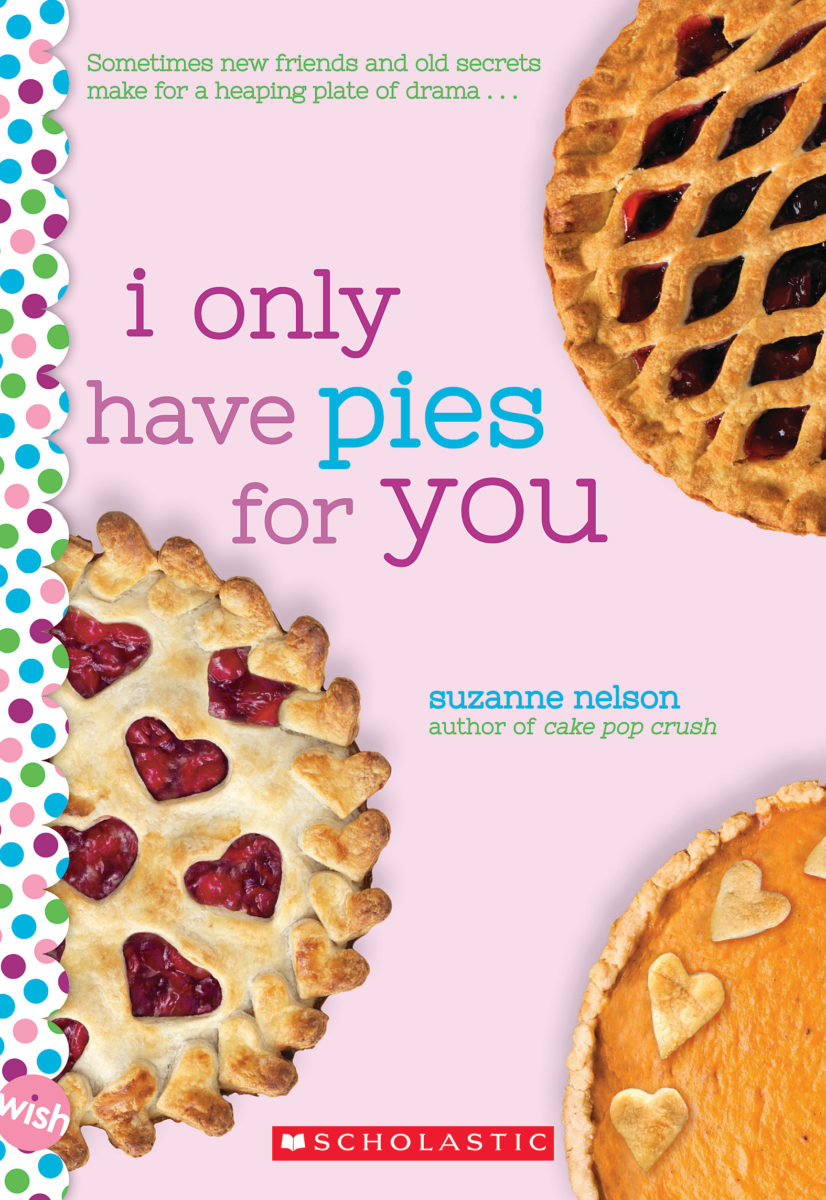 Available for purchase through Scholastic Reading Club and in bookstores and online.

Dacey Culpepper Biel comes from a long line of pie bakers. Her family’s shop, Pies N’ Prattle, is legendary in her small Texas town. But Dacey didn’t inherit a gift for baking. Her pies always end up as messy or burnt disasters. Even worse? Business has been slow lately, and Dacey wishes she could do something to help.

Then opportunity knocks: A popular TV show wants to feature the shop! But that means Dacey will have to spend time with Chayton Freedel, her arch-rival and the cute son of the show’s host. And when clues arise about a long-hidden family recipe, life at the shop may never be the same.

With a sprinkling of luck and some Southern charm, will Dacey be able to find the recipe, work alongside Chayton . . . and save her family’s legacy?

Suddenly, though, she jerked to a stop, jolting me until I nearly slid sideways out of the saddle. “Easy, girl!” I soothed Ginger, who was tense and wary, as I scrambled to grab the reins and right myself.

There was a horse blocking the trail, snorting and prancing, looking like he might raise up on his hind legs any second. I recognized him as Flash—the Jenkins’s newest gelding, unbroken and feisty enough to throw anybody who showed even the slightest hint of fear. Horses are like that—they know weak riders from strong ones.

This rider, though—a boy about my age, wearing a Stetson hat—wasn’t shirking at Flash’s tantrum. A laugh broke from him, confident and rascally. I could only make out his silhouette against the morning light.

“Your horse shouldn’t sneak up on people like that,” came his teasing voice.

“My horse!” I stiffened. “Your horse spooked mine! You’ve no business being on this trail with an unbroken horse. It’s not safe. He’s completely unpredictable.”

“Not when I’m riding him,” the boy replied. “And there’s room for two horses on this trail, if they’re going the same direction….”

“I’m not.” I prodded Ginger to get her to step around Flash. “I’m going the other way.”

“Of course you are.” He laughed again. “You always go your own way, Dacey Culpepper Biel.”

I froze, staring at him. How did he know my name? I opened my mouth to ask, but then he swept his hat from his head. I caught my breath. Espresso eyes were set in an angular bronze face under thick, jet-black brows. His black hair fell to his chin in disheveled waves. He had a rugged cuteness, but something about his face nagged at me. He looked familiar. “Who . . .”

My heart plunged to my toes as my memory of the ten-year-old Chayton meshed with the twelve-year-old boy before me. My expression must have revealed my dismay because Chayton gave a wry nod.

“Yup, it’s me. The boy you swore you never wanted to set eyes on again as long as you lived.”

My fist tightened around Ginger’s reins. “I was covered head to toe in purple pie filling at the time.”

His eyes glinted maddeningly. “Hey, purple is your color.”

I frowned. “And your teasing is just as badly timed as always.”

“Aw, come on. You can’t still be angry about that, can you? Two years is too long to hold a grudge.”

“Not if it’s justified,” I muttered.

Chayton shook his head. “You never could admit to being wrong, Dace,” he said softly.

“What?” I glared at him, every muscle in my body tensing. “You don’t even kn—” I swallowed down the rest, knowing it was pointless to argue. But I got even madder when I caught Chayton’s amused expression, as if he thought my indignation was great entertainment. I whipped Ginger around in the direction of the stables. “I’m heading back.”

“Don’t leave on my account.” Chayton urged Flash past us, setting his hat back on his head. “I ran Flash hard already. I’ll go. You stay.” He tipped his hat to me, a gentlemanly gesture I was sure he’d learned from his grandpa. “Good to see you, Dace.”

That last part he said quieter, and some of the mischievous glint left his eyes, replaced with—what? Regret? No. It wasn’t possible. Not with Chayton. Still, my face flushed, and I was glad he’d spurred Flash into a gallop and wouldn’t notice.