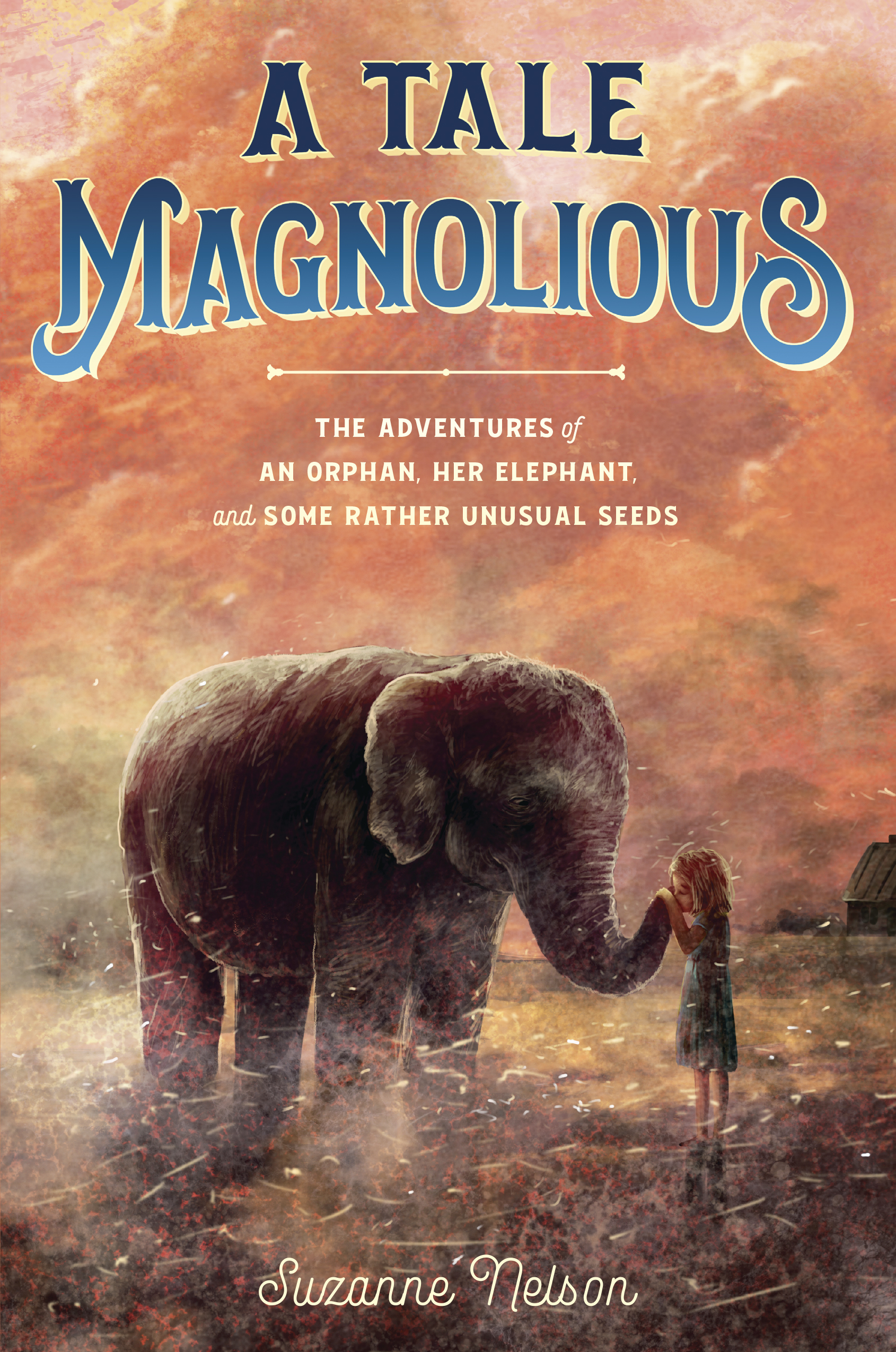 Available through Alfred A. Knopf Books for Young Readers, a division of Random House Children’s Books and in bookstores and online.

Nitty Luce is an orphan—and a thief. Magnolious is an elephant—and a fugitive. When fate brings these two unlikely friends together, they set off on an unexpected journey. Before long, they end up in Fortune’s Bluff, a once-thriving town devastated by a decade of dust storms. Everyone Nitty meets there—from a grumpy farmer to a forlorn mustache-maker—has lost hope. Except Twitch Higgler, boy detective. Twitch is convinced that foulsome rotten villainy is responsible for the town’s bad luck, and he enlists Nitty to help in his sleuthing.

But Nitty and Mag sense there’s something special buried underneath the town’s dust—and that maybe they can help it grow. In fact, Nitty just so happens to have some mysterious green seeds in her jar of treasures. If she plants them, what sort of wondrous crop might sprout? Can Nitty protect it, and her beloved Mag, from the suspicious forces at work in Fortune’s Bluff? With a touch of magic and a harvest of hope, Nitty and her exceptional elephant set out to change the destiny of a dying town, proving that from the smallest seeds, grow the greatest friendships.

Using magical realism and drawing inspiration from the Dust Bowl and Depression of the 1930s, this novel tells of a remarkable bond between two outcasts, a girl and an elephant, and the way they change one small town forever, simply by finding a family to love.

Chapter One
In Which a Thief and a Pachyderm Vanish

Nitty Luce wasn’t born a thief. She wasn’t born to rescue elephants. Or to make miracles. Nobody ever told her that, though, so she never had reason to doubt. If she’d doubted, none of the bamboozling goings-on in Fortune’s Bluff that spring might ever have happened.

But they did happen.

The morning started much like any other, with Nitty’s empty stomach. It was near on two weeks since she’d run away from Grimsgate Orphanage, two weeks fighting pigs for the slop in their troughs and waiting for breadlines to empty out to scrounge a few dropped crumbs. She wouldn’t stoop to begging, not after Headmistress Ricketts’s stories of police tossing street urchins into lockup. Just yesterday she’d caught sight of her reflection in a store window, and oh, was she a shambles! Her tumbleweed hair poked out in all directions, crispy with days-old dust. There was a film over her sun-toasted skin and her flour-sack dress, too, so in the glass she appeared more as a dirt smear than a ten-year-old girl.

“You’ll bunk in prison with the likes of Cutthroat Cob,” Miz Ricketts had told them at the orphanage. She always gave this sinister warning before lights-out, in case any of her wards got ideas about running away at night. “Or worse, Fang-Toothed Lou.”

Nitty didn’t believe a word of it. At least, not during daylight hours. Still, she didn’t like the idea of fangs of any sort, so whenever she caught sight of police officers, she kept her distance.

But this particular morning, she was doing battle with her hunger again, and it was being a downright bully. When she wandered into the heart of a city, a solid piece west of Grimsgate and north of nowhere, she was too light-headed to worry over police. In fact, on reading the poster nailed to a lone withering tree on Main Street, Nitty had to steady herself against a nearby lamppost.

COME ONE, COME ALL!

WITNESS THE DEATH OF A MURDEROUS FOUR-TON BEAST!

PUBLIC HANGING IN THE SQUARE AT HIGH NOON

A GUSTO AND GALLANT SPECTACLE NEVER TO BE FORGOTTEN.

Below the words was a gruesome cartoon drawing of a circus elephant trampling a man, with a small caption: GREAT MAGNOLIOUS KILLS TRAINER IN COLD BLOOD.

Praise for A Tale Magnolious

“Readers will be delighted by this effervescent story full of adventure, heart, and a dash of magic.”–School Library Journal

“This beautiful story, set during the Dust Bowl, shows the power of hope and love even in dire circumstances. Nelson’s ingenious young characters, wise adults, enriched vocabulary, tongue-in-cheek humor, and understanding of the elephant’s feelings make this perfect for reading aloud.”-Booklist

“The tale Nelson went on to write has an old-fashioned, Dickensian feel and plenty of vocabulary flair, with names like Miz Turngiddy and words like catawampus. It’s also an allegory about empowerment when adults are intimidated by an evil politician. In Fortune’s Bluff, it’s kids to the rescue, with the help of one mighty elephant. This is a walloping romp that delivers an important message: ‘Each and every one of us has a say when it comes to what is right.'”-Bookpage