A Batch Made in Heaven 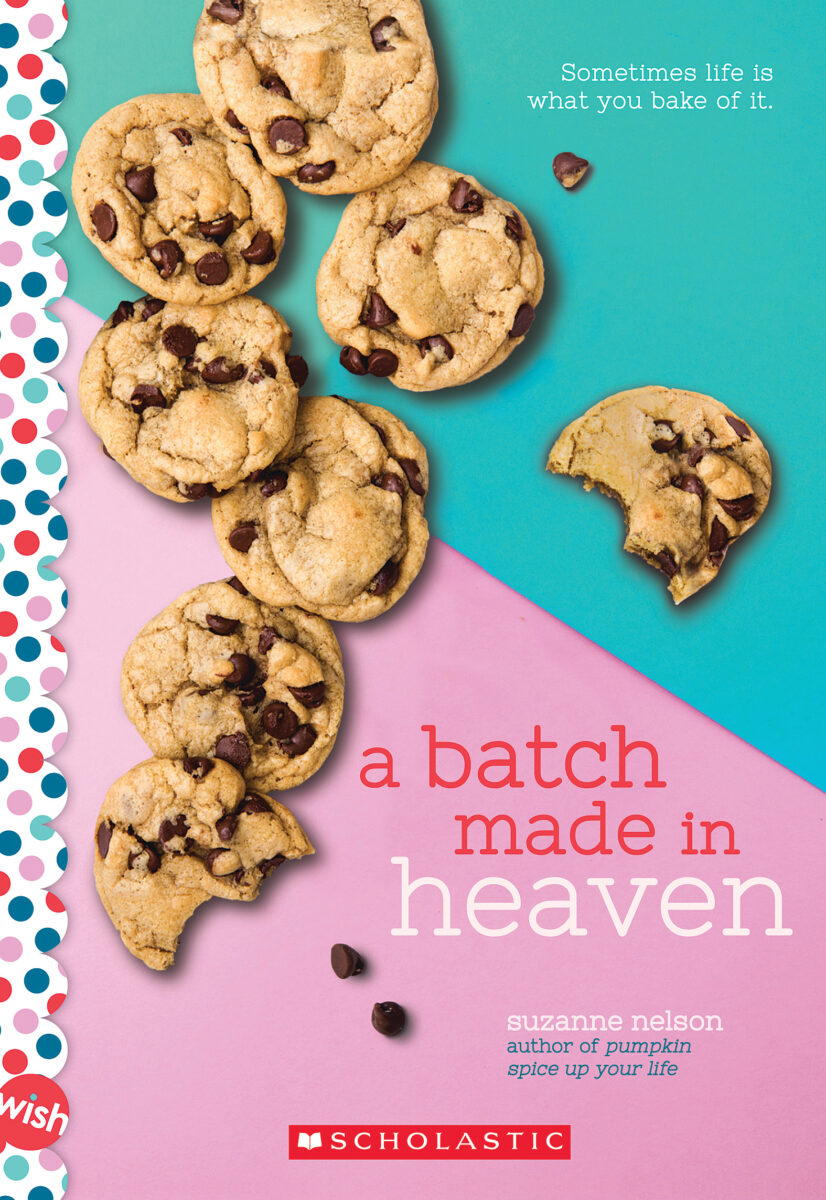 A Batch Made in Heaven is a companion book to Cake Pop Crush, You’re Bacon Me Crazy, Hot Cocoa Hearts, Macarons at Midnight, Donut Go Breaking My Heart, Sundae My Prince Will Come, Shake It Off, I Only Have Pies for You, and Pumpkin Spice Up Your Life.

Available October 19, 2021 in bookstores everywhere
Available for online purchase from:

Scrumptious recipes… a family secret… and one smart cookie ready for a challenge!

Mina is excited to start her mentorship at A Batch Made in Heaven, the bakery in her hometown that’s famous for its inventive cookies. Mina dreams of becoming a baker herself someday. But there’s a problem. Flynn, the (undeniably cute) son of the shop’s owner, won’t let Mina into the kitchen: the top secret Cookie Vault. If Mina can’t bake, then she can’t enter the big cookie competition… and if she can’t enter, she’ll never win the money to help her dad open the restaurant he’s always wanted.

What secret is Flynn hiding? Will Mina’s entire plan crumble like an overbaked cookie, or can she find a way to help her family and her heart?

As I set a cup of fruit salad on my tray, the words “mentor program” drifted down the lunch line, catching my ear. I peered around, searching for a face to go with the voice.

Finally, my eyes settled on Flynn Winston. He was in eighth grade, a year ahead of me and Kalli. His curly dark-auburn hair, striking indigo eyes, and tall, lanky stature made him easy to spot at our school. I had a hard time not noticing Flynn in general. It wasn’t just that he was cute (okay, very cute). He was the son of Mr. Winston—as in the owner of A Batch Made in Heaven. He often worked at Batch after school, ringing up customers at the sales counter.

As I watched Flynn now, I imagined us working together. He’d be showing me how to work the cash register, and I’d instantly master the task. Then he’d smile at me, and our shoulders would brush, and—
“I can’t believe I have to put up with some seventh grader.” Flynn’s words were loud enough to jar me from my daydream, and I honed in on the conversation he was having with a boy named Trent, who was captain of the archery team. “I don’t get why my dad even agreed to have a mentor in the first place….We’re busy enough without throwing some newbie into the mix.”

I bristled at the word “newbie.” How dare he? He was talking about me like I was some toddler just off the playground! The humiliation of it stung. I nudged Kalli and jerked my head in Flynn’s direction. She nodded, to let me know she was hearing his words, too.

“Who’s he calling ‘newbie’?” I hissed. Kalli’s eyes widened with worry. She knew me so well, she guessed (rightly) that it was only a matter of seconds before I spoke up to defend myself.

“Mina,” she whispered pleadingly with me. “Just let it go—”
“Shh.” I held up a finger for quiet as Trent and Flynn started talking again.
“It’s only for a few weeks,” Trent said to Flynn. “How bad could it be?”
Flynn shook his head. “All I know is that my dad better not expect me to babysit somebody who can’t tell a spatula from a spoon.”

My back stiffened. “Rude!” I whispered to Kalli. Heat flashed over my face, and my hands held my lunch tray in a vise grip. Then, despite Kalli’s quiet imploring, I marched toward Flynn.

When I tapped him on the shoulder, he spun around and looked momentarily surprised. My breath caught, because I’d never actually been this close to him before. Now that there wasn’t a sales counter between us, I could see the lighter flecks of aqua in his indigo irises, and—oh wow—were his eyes amazing. For a split second, I couldn’t think clearly. But then his words came back to me, and I regained my senses.

“Hi,” I said curtly. “I’m Mina Kapur, the new mentor at A Batch Made in Heaven.” I waited for that to sink in, watching with some satisfaction as redness swept over his fair, freckled cheeks. “Sorry to disappoint you, but I won’t be needing any babysitting. I’ve been baking all my life, so you might learn a thing or two from me.” I held up my hand in a cheery wave and swiveled on my heel, calling over my shoulder, “See you at the shop after school!”

Kalli’s mouth was gaping as she steered me toward our table. “I can’t believe you did that!” she whispered, both stunned and impressed.

“I had to!” Then the boldness of what I’d said to Flynn hit me, and I sank weakly onto the lunch bench. “Omigod, did I really just tell off the cutest guy in school?”
Kalli giggled and looked horrified all at once. “You did.”

I raised my chin. “Well . . . good. There was no way I could stay silent with him being so . . . so condescending…. The strange thing is, Flynn never seemed like a jerk before. Maybe he’s just having a bad day?”

“Could be,” Kalli offered with her typical leniency. “Honestly, I’m not sure anybody really knows Flynn.”
It was true. There was something mysterious about Flynn…. At the bakery, he always seemed polite and efficient, but behind his smile was a thinly veiled frustration. Now I wondered why.

I groaned as a new worry struck me. “What if he’s awful to work with?”
Kalli popped an orange slice into her mouth. “Mina, you’re a force of nature. He’ll see that soon enough and be grateful for your help.”

I smiled. “Thanks. I hope we can just start fresh at the shop after school.”
“That’s a perfect plan. A clean slate, a cute boy, and . . .”
“Cookies!” we finished the sentence together, and then broke into laughter.
I smiled at Kalli. “What could possibly go wrong?”